“It is a sad fact that while the reputations of British Systems artists are held in high esteem in Europe, their achievements have been long ignored by elements of the UK art establishment. The Systems Group was founded by Malcolm Hughes and Jeffrey Steele in 1970. Their creative vision brought together a collection of artists whose approach to abstract art was based on the conception of the object being constructed from a vocabulary of basic geometric elements in accordance with some form of pre-determined and often mathematical system. Their paintings appeal to the mind, as well as to the eye, and show fine qualities of precision, clarity of form and rationality of process in their creation.”  Narelle Doe.

“If, from a number of elements you create a consistent structure of relations, and then, returning to the elements, you reconstruct these entirely in terms of the structure they form, the resulting object is composed of utterly relevant parts and is perfectly economical. Such an object cannot be contemplated without giving rise to an aesthetic emotion.”  John Ernest

“The mathematical thematic or mathematical process can only be a component: one is calculating or organising something which is clearly not mathematical.”  Anthony Hill 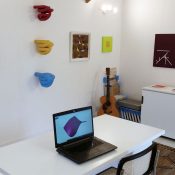